These farmers in Sri Lanka are at the interface of forest and agriculture, where most incursions by elephants occur.

In Sherpur, rural Bangladesh, as the human population increases, so does the demand for the land and natural resources that the elephants need to survive. This is a story of human-animal conflict that is repeated around the globe with many species and rural communities as they struggle to find the balance for coexistence. END_OF_DOCUMENT_TOKEN_TO_BE_REPLACED

Or why we shouldn’t take those large odd-looking animals for granted.

Step into any nursery or play room, take a quick walk down the isles of your local bookstore or library. Or just look at the clothing and toys we surround children with. They are full of images of iconic animals – giraffes, rhinoceros, hippos, lions, elephants…

We use these animals to teach the alphabet, and cherish them as beloved characters in our story books. They adorn everything from birthday cards to blankets.

What would the world be like without them? END_OF_DOCUMENT_TOKEN_TO_BE_REPLACED

Elephant calves at a logging camp in Myanmar. Image courtesy of Hannah Mumby.

There are a great many reasons to study elephants; they’re endangered, highly social, quite frankly huge and hold a unique and central place in many cultures. They can also be very strong, sometimes dangerous and slow to do what you want. But that’s not enough to stop me from working on them! One of my interests is actually their life cycles. In the past I’ve studied humans and non-human primates and the fact that elephants evolved long lives, almost on a par with our own, but on a separate evolutionary trajectory was fascinating to me. Elephants also usually only have one calf at a time and each calf is dependent on its mother for many years. These characteristics allow us to test a lot of ideas underpinning theories of life history and ageing, including ones that have been primarily designed with humans in mind.

So why is this interesting? END_OF_DOCUMENT_TOKEN_TO_BE_REPLACED

A small family of elephants in Uda Walawe wanders upon a dead calf which does not belong to them. Yet they show great interest, touching and hovering over the body for hours, refusing to let any observers near until they finally decide to move off. Photos: UWERP

In the past week a paper on reassurance behavior in elephants by Plotnik et al. in PeerJ has been generating quite a bit of buzz. The study, which you can learn more about from the researchers themselves here, collected a series of observations on a group of captive elephants in Thailand documenting how they reacted when one of their companions was distressed.  It showed that when some individuals were disturbed in some way and expressed their distress, other individuals approached them and interacted in ways (such as touching, vocalizing) that suggested that they might be trying to comfort or console their companion.  Such behavior would indicate that elephants have the capacity for empathy, along with a handful of other species.

The title of this post is meant to work on at least two levels. First, we might wonder at a biological level – what is the function of the curious  behavior elephants sometimes show toward others in distress? Why might it have evolved? Whom does it benefit? Second, we might wonder at a practical level – should the capacities of elephants endow them with additional conservation value? Should it matter on the ground? So today, the first ever World Wildlife Day, I’d like to examine these two sets of questions, which are very distinct. END_OF_DOCUMENT_TOKEN_TO_BE_REPLACED 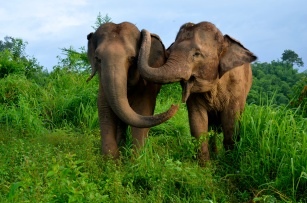 Think Science. Think Education. Think Elephants. That’s our motto at Think Elephants International (TEI), a nonprofit based in northern Thailand.  Founded by Dr. Joshua Plotnik in 2010, TEI’s aim is to conserve wild Asian elephants in Thailand by integrating elephant intelligence research with conservation education programming. We “think elephants” both because we think of elephants when we consider ways to help improve their conservation status, and we also think like elephants in designing our research paradigms. We use scientific research to understand how elephants “see” their world and how we can most effectively save their world. Dr. Plotnik has shown that elephants are both able to pass the mirror self-recognition task (Plotnik et al. 2006) and that they can cooperate together to complete a novel problem (Plotnik et al. 2011). In addition to demonstrating the amazing cognitive abilities of this species, we are also passionate about research that can directly impact conservation techniques to mitigate human-elephant conflict. END_OF_DOCUMENT_TOKEN_TO_BE_REPLACED

Koshik is a 12-year-old male Asian elephant housed at the Everland Zoo in South Korea.  For some years he had been a local star that was the subject of some internet fame due to his uncanny ability to produce human-like sounds.  Not only this, but they actually seemed to resemble Korean words.

In a new paper in the journal Current Biology by Angela Stoeger and colleagues, Koshik’s vocalizations were put to the test.  Could he really produce words, as trainers claimed?

The researchers recorded Koshik’s special utterances and played them back to a panel of native Korean speakers who had never heard him before. These participants did not know who was producing the sounds or what they were supposed to mean. They were then asked to write down the words they heard.  They found that Koshik’s call resembled five Korean words: ‘‘annyong’’ (hello), ‘‘anja’’ (sit down), ‘‘aniya’’ (no), ‘‘nuo’’ (lie down), and ‘‘choah’’ (good).  He appeared to be very good at reproducing the vowels in each of the words, but the consonants were more problematic.  “Choah” for instance was interpreted sometimes as “boah” (look) and “moa” (collect) by the human listeners.

END_OF_DOCUMENT_TOKEN_TO_BE_REPLACED

An artist’s reconstruction of what the ancient herd may have looked like, here showing Stegotetrabelodon

The evolution of behavior is tricky to study for one very simple reason: behaviors usually don’t fossilize.  While anatomy can be reconstructed based on skeletal remains and imprints, how might one glimpse how a living, breathing organism behaved millions of years ago? END_OF_DOCUMENT_TOKEN_TO_BE_REPLACED

There are at least two kinds of science today – a) the kind that requires millions of dollars, a small army of techs and postdocs, and many fancy doo-dats or whatsits and b)everything else. The latter doesn’t do too well in today’s funding climate, which is geared toward funding BIG EXPENSIVE science. A small group of scientists – mostly students – are trying to change all that by appealing directly to the public to fund small, very cool, science projects and earn a nifty little reward of thanks. The projects are diverse – everything from zombie fish to next-generation algae technology.  The result: The #SciFund Challenge! Help us help elephants – and help science along the way!

Please share the link above to help us reach our goal!

Check out all the other projects here:

Kanthi (far left) and Kamala (far right) were the most inseparable pair of elephants we saw during the study. Members of their social group, the K unit, were often together whenever they were seen.  Yet not all social units were so tightly knit, with individuals being scattered into small groups quite far apart.

Male and female Asian elephants form distinct parallel societies in which adult females and calves move together and form visible groups whereas adult males are typically more solitary.  For many years there have been two somewhat conflicting characterizations of female Asian elephant society.  The classic view, popularly held, is that Asian elephants form very tightly-bonded families centered around older adult females known as matriarchs.  This view is adapted wholesale from the many excellent long-term studies of African savannah elephants [1-3], which do exhibit this type of social organization. END_OF_DOCUMENT_TOKEN_TO_BE_REPLACED