Elephant behavior has long endeared the public. From complex social structures to tool use, hearing stories about behavior not only teaches about fantastic ecological adaptations, it shows a window into elephant’s lives that we can understand and relate to on a personal level. Showcasing behaviors has often been used to help elephant conservation. However, behaviors are sometimes disconnected from how managers actually conserve elephant populations. In a new study, we examine elephant space use behavior in the hope that it can directly inform management practices.

END_OF_DOCUMENT_TOKEN_TO_BE_REPLACED

We’re partnering with Bring The Elephant Home in Thailand to trial the potential of alternative crops to support farmers living with elephants. We’re excited to bring the first news from the field, by Brooke Friswold, who is a PhD student at King Mongkut University of Technology Thonburi!

The team in Thailand has been busy over the last two months – especially while director and founder of Bring the Elephant Home (BTEH) Antoinette van de Water has been in country! With the start of data collection for a subset of five BTEH rented lemongrass plots and ten community-owned pineapple plots on the horizon, equipment and methodology trialing has begun. Data collection via camera trapping is set to begin in mid-May to record baseline elephant behavior in control and experimental plots for the HECTAARE project and for Brooke Friswold’s PhD research with King Mongkut’s University of Technology Thonburi (KMUTT) in partnership with BTEH and HECTAARE.

END_OF_DOCUMENT_TOKEN_TO_BE_REPLACED

The Sumatran elephant (Elephas maximus sumatranus), found only on the island of Sumatra in Indonesia, is critically endangered according to the International Union for the Conservation of Nature (IUCN). The population is decreasing with approximately 1500 elephants left in the wild in fragmented populations. Deforestation, loss of habitat and poaching for ivory are amongst the major threats to the survival of this species.

The Leuser Ecosystem (which forms a significant part of the UNESCO World Heritage site ‘Tropical Rainforest Heritage of Sumatra’) and Ulu Masen in Aceh, Sumatra are a stronghold for the critically endangered Sumatran elephant and other critically endangered wildlife (e.g. orangutans, rhinoceros, and tigers). Both Leuser and Ulu Masen are essential for the survival and conservation of the Sumatran elephant, but much of their habitat falls outside the protected areas and in the most threatened lowland forests, creating elephant human contact. This makes it critical that effective mitigation strategies are developed that take into account elephant behaviour and the use of technology such as early warning systems to reduce conflict with the local communities.

END_OF_DOCUMENT_TOKEN_TO_BE_REPLACED

The floating object task is a puzzle that comparative cognition researchers present to animals (including humans) to study the evolution of cognitive abilities, like cause and effect understanding and the ability to use water as a tool. To solve the task and retrieve the floating reward inside, you must add water to a tube to raise the water level and reach the reward. Some primates, like orangutans have been able to solve the task by carrying water in their mouths from a drinker and spitting it into the tube to reach a peanut.

My colleague, Dr. Sarah Benson-Amram, and I presented this puzzle to elephants for the first time (Barrett & Benson-Amram, 2020). We wanted to see if elephants’ unique trunk morphology would make them well-equipped for the floating object task. Since they spray water for bathing, and hold water in their trunk as a vessel for bringing it to their mouth, we predicted that they would be up for the task. We collaborated with the National Zoo and the Oklahoma City Zoo to carry out this research. We used a tube filled about 1/3 of the way with water, baited with a floating marshmallow. As is often the case with animal research, things did not go as we expected.

END_OF_DOCUMENT_TOKEN_TO_BE_REPLACED

The tiny bee vs. the world’s largest land mammal…

Over a decade ago now, Dr. Lucy King developed the beehive fence as an elephant deterrent, capitalising on a then-recent discovery that African elephants avoided African honeybees (Vollrath & Douglas-Hamilton, 2002). The beehive fence is a relatively simple, inexpensive deterrent, aiming to be a tool that communities can use independently following set-up. The basic premise is that a series of beehives surround an area to be protected from elephants, and if elephants attempt to enter, they will disturb the beehives, causing the colonies to swarm (refer to King et al. 2009; 2017 for more details). It should come as no surprise, that the success of multiple beehive fence trials in Africa, led to a curiosity as to whether this technique could also help Asian communities experiencing comparable levels of crop-raiding.

END_OF_DOCUMENT_TOKEN_TO_BE_REPLACED

Until the recent COVID-19 epidemic halted travel around the globe, the island of Sri Lanka thrived on tourism. A big part of the country’s GDP is attributed to tourism. According to Sri Lanka Tourism Development Association, 783,000 tourists visited Sri Lanka’s national parks in 2018, which is roughly 38% of the travelers who entered the country. The parks earned over 2 billion rupees (over $11 million USD) in entrance fees alone. Clearly, elephants have a huge economic value (more about this here).

END_OF_DOCUMENT_TOKEN_TO_BE_REPLACED

We’ve temporarily halted field work due to the pandemic. So, we thought this was a good time to bring you some stories from our archives of field notes! In honor of Mother’s Day, here’s an incident that helped us appreciate just how little we understand about what goes on beneath the surface of an elephant’s mind. Happy Mother’s Day!

Can you tell what’s going on in this video? Well, if you know the elephants individually, there’s quite an intriguing story behind it. Read on to see what’s happening, and see if you can follow the video…

END_OF_DOCUMENT_TOKEN_TO_BE_REPLACED

Join us for An Evening With Elephants at EVE Encinitas on November 2nd, 5-7:30pm for a special in-person event to learn more!

When I was starting the project in 2005, learning to recognize individual elephants was tricky. Building the photo catalogue was laborious, we went through videos frame by frame trying to distinguish an ear flap here, a tiny hole there. But even then, there were some who looked so unique that it was enough to see them once – they were difficult to forget. END_OF_DOCUMENT_TOKEN_TO_BE_REPLACED 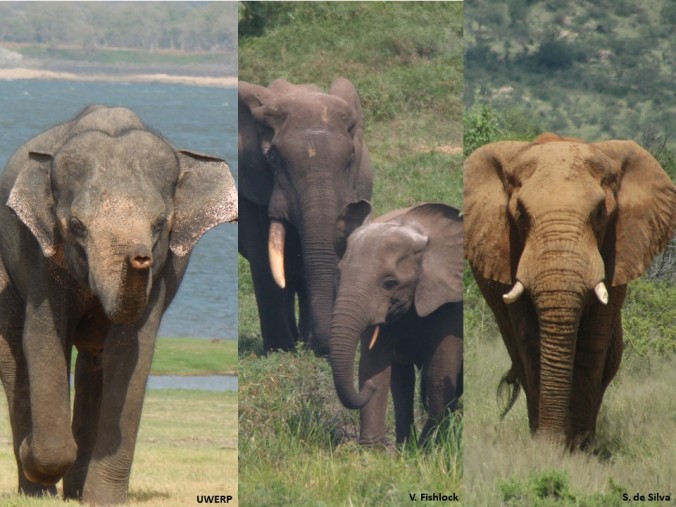 I visited Udawalawe in 2014 to work with the Udawalawe Elephant Research Project, and was especially fascinated by these combination calls. Combining meaningful units into sequences with an additional meaning is a key component of human language, but there are relatively few examples of this phenomenon in other species. Listening to the Udawalawe elephants, I was struck by the fact that they nearly always produced combination calls in the same order: a single roar followed by a single rumble. Why was this? Could it be analogous to grammatical rules in human language? Or could it be as simple as an anatomical constraint that made it difficult for the elephants to produce a rumble before a roar? END_OF_DOCUMENT_TOKEN_TO_BE_REPLACED

Electric fences that split forested habitat are all too common. As a result, occurrences like this are frequent.

Sri Lanka is part of the ancestral home of Asian elephants and a skeleton traced to this population now serves as the definitive “type” specimen. They existed before settlers colonized and cultivated, before the ancient tanks were built, before the kings and kingdoms, colonizers and governments. This was their land long before humankind set foot on it to set about defining visible and invisible boundaries for ourselves and everything else. Yet here we are, and we are here to stay, so our fates are now linked. An elephant is more than a mere animal or symbol. It is the most un-ignorable occupant of a swiftly vanishing world that harbors an infinitely old and precious natural heritage. It is also a force of nature that annually claims human lives. Therein lies the crux of the difficulty. There’s just one question we need to ask ourselves: do we want elephants (and their bretheren) to persist on this little island, or not? I pose this question on World Elephant day because we are at a juncture that will decide the outcome. END_OF_DOCUMENT_TOKEN_TO_BE_REPLACED