Elephant calves at a logging camp in Myanmar. Image courtesy of Hannah Mumby.

There are a great many reasons to study elephants; they’re endangered, highly social, quite frankly huge and hold a unique and central place in many cultures. They can also be very strong, sometimes dangerous and slow to do what you want. But that’s not enough to stop me from working on them! One of my interests is actually their life cycles. In the past I’ve studied humans and non-human primates and the fact that elephants evolved long lives, almost on a par with our own, but on a separate evolutionary trajectory was fascinating to me. Elephants also usually only have one calf at a time and each calf is dependent on its mother for many years. These characteristics allow us to test a lot of ideas underpinning theories of life history and ageing, including ones that have been primarily designed with humans in mind.

So why is this interesting? Well, for over 20 years the idea that early life conditions can affect your later life has been part of the scientific consciousness. And there’s an increasing body of evidence suggesting that early life conditions affect human health and mortality. In humans, reproductive senescence is characterized by menopause, so women are unable to reproduce into very old ages. Elephants are a very interesting example, because not only can we see them senesce over many decades, they seem to have a gradual decline in reproduction, rather than the brick wall of menopause, so we can look and individual variation in that decline. 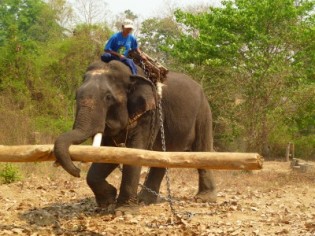 A timber elephant hauls a log in Myanmar. Image courtesy of Hannah Mumby. 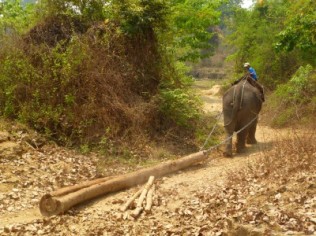 During my PhD and first post-doc I’ve been working with a very interesting population of elephants. I work with lifetime records of elephants working in the timber industry in Myanmar. The country still has a large working elephant population (around 2,700 elephants), and records have been kept since the British colonization in the 1890’s, meaning there are data on around 10,000 elephants covering up to five generations. The elephants in question work mainly dragging or pushing logs. Whether or not we find this practice ethical, it’s clear that these elephants have better survival and reproductive rates than their cousins living in zoos [1]. I think this might be linked to the fact they are have tightly regulated working hours, they have contact with only a few humans, they’re released into the forest at night allowing them to interact with other elephants, and were able to meet and mate with wild elephants when they were released.

I think that seasonal variation is very important in this population. I know we think elephants are sturdy, but it seems to me they’re also very sensitive! I’ve done earlier work that indicates that although elephants can reproduce throughout the year, there are fewer births in the early monsoon months (June to August) [2].  I found this puzzling because I assumed forage conditions might be best for elephants at this time of year, and I’d also found that intermediate temperatures and high rainfall were linked to highest likelihood of elephants surviving each month [3]. However, when I monitored markers of a hormone called cortisol, that is associated with stress-response, I found that levels of this might also peak in the early monsoon months [4]. All of these investigations are correlative, so I can’t say whether it’s seasonal patterns in forage, workload, stress or climate that are underlying the reproductive and mortality events, but it’s very interesting that all the variables are so related.  The Uda Walawe Elephant Research Project has also found evidence for seasonal variation in reproduction in elephants in Sri Lanka [5].

My paper shows that if we follow elephants through their lives, the pattern of reproduction is quite similar until they reach the peak at around 24 years. At that point elephants born in the early monsoon or “high stress” months have higher likelihood of giving birth. But with age, it declines more rapidly and the “high stress”-born elephants have a lower age at last sighting (when they die or the age they are at the end of the study), so it seems they end up with fewer babies overall, despite the higher peak [6]. Interestingly, there are no high-stress born elephants reproducing aged over 50. This doesn’t surprise me because in an earlier study I found that they had reduced survival in their infanc[2], so a different pattern of reproduction might not be the only difference in these elephants.

And what about for the elephants of Myanmar? At the moment a priority is to support the population so that elephants are as healthy as possible and so that more wild elephants are not brought into captivity. This means that understanding how seasonal variation affects the elephants and potentially intervening, for example by supplementing them with food are important for management. And some of these ideas could translate to other captive populations, and remind us that elephants are sensitive to their environment, possibly over many years.

In the next years we’re hoping to look at the male side of reproduction, to investigate how individual health varies over a lifetime and markers of ageing in the elephants. Hopefully this will give us an even clearer picture of how such a long-lived and slowly reproducing animal works!