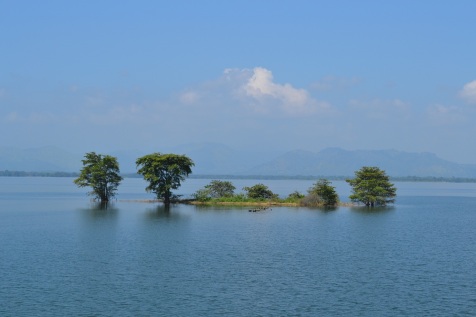 The island that is not an island.

On a beautiful Sunday morning, I left for the Uda Walawe reservoir. I had traveled this way before, and I knew what to expect. This man-made reservoir is located within the national park’s boundaries, and is separated from the road by the electric fence. Being approximately 3400ha in size, it is a significant source of hydroelectricity, and I had high hopes for spotting wildlife. A good hour and my morning King coconut later, the first specks of reflected sunlight started to appear on the horizon between the trees. The sky was particularly clear and there wasn’t a sigh of wind. I quickened my steps, and, non-compliant to popular advice, kept walking towards the light in a steady pace. A few specks made way for hundreds, and then thousands, and with every step I gained, the view became more spectacular, as if the reservoir invited you kindly to acknowledge its splendor.

As the rainy season was coming to an end, it was completely filled, and separated from a dry river bed by the dam. In the glistening reflection of the sun, water birds of all sizes and colours gathered, accompanied by water buffaloes enjoying the early morning sun as much as I did. Together with the occasional island and the mountains on the horizon, one could not help but be awed by this vibrant and breathtaking composition. I followed the road over the dam and along the reservoir. Inquisitive and kind as Sri Lankan people are, tuk-tuk passengers smiled, waved or shouted enthusiastically as they went by, and I did the same back. As my walk progressed, however, the atmosphere turned ecstatic. Where at first I blamed my looming sunburn, I noticed that one word echoed from the majority of vehicles. “Aliya”(elephant). I walked on.

In the distance, the road seemed obstructed by a handful of vehicles and I soon found out why. At the other side of the electric fence, right next to the road, a big bull elephant was standing on the steep reservoir bank. I would later learn that this animal goes by the name of “Rambo”. I was surprised at both how far this impressive animal was from his conspecifics, or even main land, and how close it had approached humans. I wondered how far he swam to get to where he was now. I knew the reservoir stretches as far as eight kilometers up north, and I estimated that the nearest accessible land was at least a few hundred meters away. The spectators seemed delighted by the presence of the elephant, and as one car decided to move on, the next one soon joined the group. Most people cheerfully fed the animal a variety of foods, and in the twenty minutes of my observation, the elephant gratefully accepted bananas, corn leaves from the boiled corn cobs down the road, and even a sandwich. I sat down and had a banana myself. The strategy of waiting for people to feed whatever they carried on them seemed to pay off, and the tourists took pictures with Rambo, sometimes standing dangerously close.

Where other wild elephants spend much of their time feeding, I wondered if this elephant still had the know-how and the skills to sustain itself without its fast food habits. Despite the big variety in the fruit being fed, the sheer amount of it seemed to greatly outreach what the elephant could possibly find in the wild. Additionally, human intervention selectively genetically enriched many fruits with sugar and other simple carbohydrates, which differ significantly from grass and other fibrous plant material that constitutes the bulk of the diet of wild elephants, not to mention sandwiches. I wondered how the energy expense and the dietary calorie content of this elephant changed from that of the other (grazing) elephants, and it seemed unlikely that this diet would go without any health consequence. For most animals, nutritional wisdom only applies in their native range and habitat, even for intelligent species like elephants. When fed ad libitum, or at least more than needed, animals (wild and domesticated) are prone to become overweight. Rambo also had tears streaming from his eyes, – apparently this condition, caused by excessive sugar consumption, could eventually blind him.

Watching the elephant munch down on everything he could get his trunk on, I felt hungry again and halfway through my second banana, I couldn’t help but thinking about disease transmission. In this case of close and frequent many-to-one human-wildlife interaction, disease transmission risk seemed conceivable. Tuberculosis (in this case Mycobacterium tuberculosis), for example, is known to transmit between humans and wild elephants, and is a major human health issue in Sri Lanka. After infection, knock-on effects are to be considered, even in relatively solitary animals like male bull Asian elephants. Additionally, with the potential of tuberculosis to sweep through entire wild populations, the outcome can be much more severe than the debilitation or death of ‘just’ one animal.

As I sat there reminiscing, my poor pale skin whispered that it was time for me to start walking. I looked at the elephant, who looked back with a sense of disbelieve as to how long I sat there without sparing a single banana. I thought about the signs often seen in national parks and reserves that read: “Take nothing but pictures, leave nothing but footprints” and found: “Feed no other than your own species” an appropriate addition. It was only after walking for a while that I paused, looked back for a final glimpse of Rambo, and continued my journey.