Or why we shouldn’t take those large odd-looking animals for granted.

Step into any nursery or play room, take a quick walk down the isles of your local bookstore or library. Or just look at the clothing and toys we surround children with. They are full of images of iconic animals – giraffes, rhinoceros, hippos, lions, elephants…

We use these animals to teach the alphabet, and cherish them as beloved characters in our story books. They adorn everything from birthday cards to blankets.

Last week the IPBES released a monster report detailing how biodiversity today is threatened by human activities. A splashy number that grabbed a lot of headlines – at least ONE MILLION species are at risk of extinction in coming decades through human activities.

But actually, elephants might not be among them. Good news?

Unfortunately, not if you dig deeper.

Traditionally, a species’ risk of extinction is determined by modelling how likely populations are drop below a certain number within a policy-relevant time frame, say 100 years. The trouble is that elephants and many other iconic large-bodied species can live a long time (if they aren’t hunted), and breed relatively slowly.  While this can make them extremely vulnerable and sensitive to disturbances, the effects need not be visible for a long. LONG. Time.

That means we may fail to recognize that some animal populations are in trouble if we only rely on their risk of extinction.

In a study just published in the journal Frontiers in Ecology & Evolution, we argue that for long-lived slow-breeding species, we need a better way of assessing their vulnerabilities. We propose the concept of a “demographic safe space” based on the idea that there are few crucial biological variables (birth and death rates) that govern whether populations are growing or declining. When these rates are healthy, populations are within the boundaries of the safe space. When they are not, it is a call to action. They key is to measure those variables, also known as vital rates, in the wild.

Elephants are good example of this.

Our long term study at Udawalawe showed that most females typically have just one calf every six years or more, and that they have about a 5% chance of dying even after reaching adulthood. They also mature slowly, typically breeding at around 13 years of age. Contrast this with a species like tigers, in which females are capable of reproducing within just a few years and can produce litters of several kittens per year. 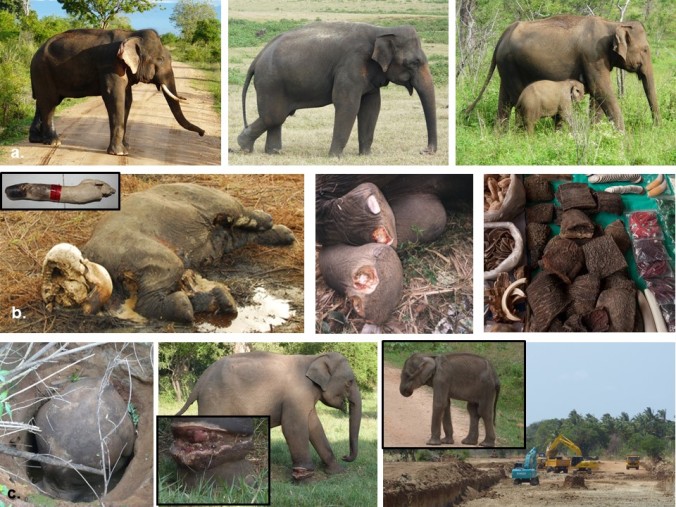 Only around 1.5% of Asian elephants have tusks, all of which are male. Habitat loss, poaching for skins, parts and capture of live animals are leading threats, alongside accidents and human-elephant conflict. Healthy females and calves are keys to the survival of elephant populations.

Through a series of simulations, we tested how threats like habitat loss and hunting could affect elephant populations. Our new study shows that elephants are extremely sensitive to changes in birth rates and the mortality rates of females and calves. In the best case scenario, they can tolerate no more than a death rate of 8% among adult females. Male mortality, on the other hand, has very little effect because only a few males are required as breeders. But even populations that are in decline may not go extinct right away if they are large – it’s more like a slow-motion train wreck that happens over hundreds of years. In smaller populations the effects are more dramatic

The study highlights a little-appreciated fact: the biggest threat to Asian elephants is habitat loss, followed by illegal trade in live animals and body parts (see here and here).  The demographic consequences may be hidden, and take a long time coming but they can be insidious. Many elephant populations in Asia are already so fragmented that they number in the tens or hundreds. The way to recover these populations is to focus on improving the survival of females and calves, as well as their breeding rates, To do that, we need to address issues like land-use change alongside illegal trafficking. Conservation efforts also need to place much greater emphasis on the distinct populations that constitute a species, and whether they are healthy, than on ballpark estimates of how many individuals of the species there are throughout their range. The idea of “demographic safe space” helps to identify which populations are healthy, and which ones aren’t.

The data for this paper come from just a handful of studies – for most elephant populations, we have no idea whether they are within their demographic safety limits. Indeed, we don’t know if this is the case for many of slow-breeding iconic species, especially those large enough to be called “megafauna,” and many of which are herbivores like elephants. Think: Giraffes, Rhinos, Hippos. This paper urges that we are desperately in need of assessments for these threatened species, before the demographic train plunges off an unseen cliff.

Demographic inertia is like a train – very hard to reverse course once it gets going downhill.

There is good news here though – by measuring and identifying the vital rates that are most in need of improvement, we hope that the wildlife managers, conservationists, policy makers and the public can rally together in time to save these beloved species.

2 thoughts on “E is for “Endangered””