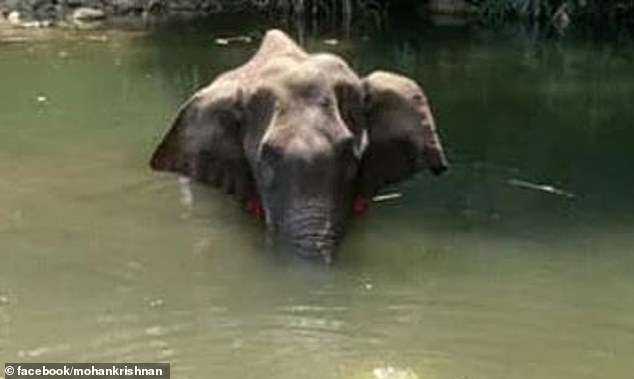 Photo by Mohan Krishnan of injured elephant in the water.

Somewhere, there is a hungry elephant, following her nose, wandering an ever-diminishing forest in search of food. She ventures to her usual places, finds them lacking. She wanders further from where she feels safe, considering what she may find closer to the villages nearby.

Somewhere there is a hungry person. Perhaps a farmer, perhaps a hunter. He is looking to drive away pests from his land, or maybe to earn a bit of money from bushmeat. He selects a large fruit or vegetable, say a pumpkin or pineapple. He hollows it out, hides an improvised explosive inside, leaves it where some animal will find it.

We know what happens next.

In the past days, there has been an uproar concerning the sorry fate of a pregnant elephant in Kerala who encountered baited fruit that ended not one, but two lives, in a most horrific manner. There have been many expressions of outrage and disgust, cartoons and caricatures of the ugliness of humanity, as revealed by their deaths. At the same time, some friends and colleagues have questioned why people seem suddenly so upset now, at this particular story, when such awful incidents are unfortunately all too common.

Don’t know why this recent #elephant death has become such big news. Elephants have been dying after biting into explosive-filled fruit (usually meant for wildpig) for decades. If it is bec the elephant was pregnant, most adult female elephants r either pregnant or lactating. 1/7

Unless we seriously think about how much we -the more privileged- are willing to give up personally and follow through on it, it is just hypocritical to outrage about these incidents. 7/7

They remind us that everyone shares a responsibility for what happens to wildlife, and the environment at large – including those in urbanites whose consumption habits lie at the roots of environmental injustices and conflicts around the world.

We appreciate both sets of sentiments – the outrage itself, and the questioning reaction to it. June 5th is World Environment Day, so we wanted to unpack this story and the tensions it reveals, to aid the sensitivities and understanding of those who are not so familiar with the issues conservationists, particularly those who work on elephants, are all too familiar with. We also wanted to look at elephants themselves, and contrast what these incidents reveal with the romantic notions people have about the incredible abilities of these animals.

First the question – why now? Let’s look at the trends in Sri Lanka, where use of similar explosives (known locally as Hakka patas or “jaw explosion”) has been on the rise for years (read: related article on Mongabay), illustrated in this graphic (source: Devini Senaratne on Medium, based on data here and here): 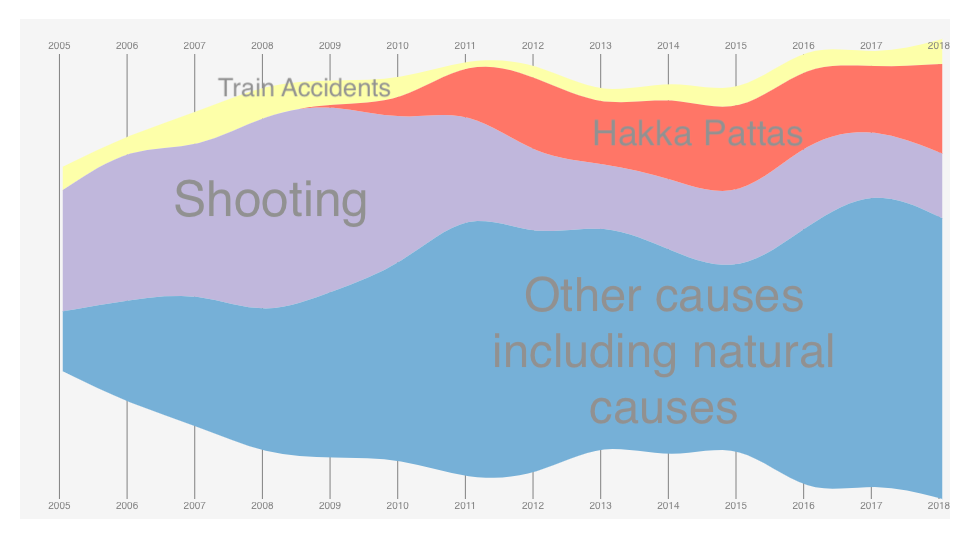 Use of explosives, hakka patas, along with other unknowns (e.g. suspected poison) is increasing even as shootings are declining in Sri Lanka. The Department of Wildlife Conservation has an interesting hypothesis to explain this – that as they have cracked down more severely in prosecuting those responsible for shootings, people have switched to other fatal methods that are more difficult to trace back. 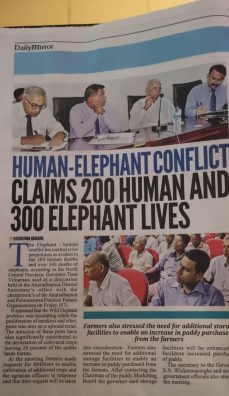 The headlines change little from year to year.

Explosives are widely used throughout Asia both as a means to punish crop pests such as wildboar and elephants, as well as for poaching. The use of poison is also widespread.  This is one way people retaliate against wildlife that are perceived to cause them hardship. Because let’s not forget, in addition to losing their subsistence crops, hundreds of people are killed by elephants each year as well, comprising the other half of the casualties in the war labelled “human-elephant conflict” (reviews here and here). The grieving families may rightly ask – where is the righteous outrage when a child or grandmother is killed in their own home by an elephant? Absent help from the outside world, some take matters into their own hands.

So what’s so special about this story? For a start, the original heartfelt and emotional post by a forest officer, who personified the elephant and described her innocence suffering as he imagined it (click on  post to see translation):

Then there were the media, who took his words and reported it as though the animal had been hand-fed this bomb (“…after locals fed it to her…”), though this is probably not what happened and there is no way to know (perhaps some would call this a subtle difference, but psychologically, it is a much more powerful and emotion-invoking image which the media surely understands).  Whatever the circumstance, it doesn’t lessen the cruelty of the outcome (Read related post: Morning walk).

So now we have this moment, what do we do with it? If the only thing that happens is that people express anger and vitriol online, then simply go about their daily lives afterwards, the death and the attention will have been pointless. My colleagues are correct to call on everyone to examine their own lives, and how they contribute to the greater catastrophe of environmental degradation, of which this incident is just a single outcome.

I do think though that this is an opportunity.

As conservationists, we often struggle for air time to get recognition for grave problems that we may be all too familiar with but the rest of the world seems to have no clue about. Human-elephant conflict is one of them. Rather than question why people suddenly seem to care, we should be grateful – grateful that people care at all, and have constructive conversations about what needs to change. For those who didn’t know that things like this happen – now you do. Without merely placing blame on the nameless faceless people who daily live with the hardships of having elephants next door, if you can ask yourself what role you play in the bigger picture, and what you can do to change it, that would be more useful (Read related post: Feeding our Waste to Wildlife).

It would be tone-deaf here not to mention what is happening in the United States and juxtapose the two. Having struggled for centuries with racial biases and inequality, faced with yet another atrocious horrible death it doesn’t do to question why people are suddenly so upset now. The more useful response is to seize the moment, keep up the awareness, and mobilize for change. It may have happened a thousand times before, but the hope each time is that this time will be different, that SOMETHING important will change.

Don’t think that it’s absurd to draw this parallel. What’s the value of human life, of different colors? Of animal life? Of one individual vs. many? Do they compare? The world long since stopped paying attention to the Rohingya refugee crisis, but the massacre still occurred and the city-sized camp is still there, in the midst of an elephant corridor. Where is the outrage and in which direction should it go? These are not easy questions. Each individual has to figure out for themselves how they weight these things, what they’re willing to do or give up.

For my part, I wish the elephants would wise up. I’m sure many people have wondered this – dogs can sniff out explosives, can’t an elephant? Some years ago, researchers noticed that elephant herds in Angola seemed to be able to avoid minefields left behind by war. They wondered whether this could eventually help save human lives. But animals have to learn to associate a sight, sound or in this case smell, with danger. A lot of elephants had to get killed or injured first before herds recognized what they needed to avoid. They trained themselves. This doesn’t seem likely with threats like food bombs, which are rare, irregularly placed over a vast landscape, and may often be encountered by solitary animals that later perish.

So let us not diminish the legitimate anger people feel, and let us express our grief and sorrow without self-righteous finger pointing or demonization of Others whose lives we can barely understand. Let us continue learning, empathizing, struggling, to make the world a bit better however we can.