I visited Udawalawe in 2014 to work with the Udawalawe Elephant Research Project, and was especially fascinated by these combination calls. Combining meaningful units into sequences with an additional meaning is a key component of human language, but there are relatively few examples of this phenomenon in other species. Listening to the Udawalawe elephants, I was struck by the fact that they nearly always produced combination calls in the same order: a single roar followed by a single rumble. Why was this? Could it be analogous to grammatical rules in human language? Or could it be as simple as an anatomical constraint that made it difficult for the elephants to produce a rumble before a roar?

I thought it would only take a few months, but what I had initially envisioned as a short project quickly ballooned into a massive undertaking. Realizing that the paper would be more complete if we included all three elephant species, we invited three colleagues who study African savannah elephants (Angela Stoeger, Joyce Poole, and Caitlin O’Connell) to contribute their data as well. Not yet satisfied, we expanded the scope of our analysis, including data on the behavioral contexts in which the calls were produced, as well as a number of other variables. Three and a half years and countless revisions later, the study was finally complete. 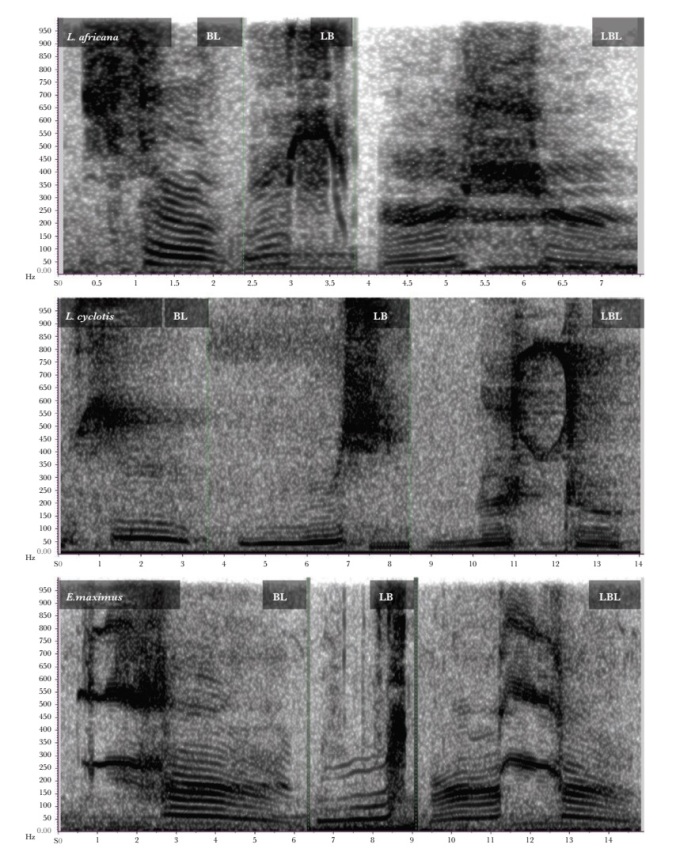 Our findings confirmed my initial impression that Asian elephants primarily produce roar-rumble combinations, while African forest elephants produce a more even mix of roar-rumbles, rumble-roars, and rumble-roar-rumbles. Somewhat unexpectedly however, African savannah elephants also heavily favored roar-rumbles—more like the distantly related Asian elephant than like their close cousin, the African forest elephant. This suggests that the differences among the combination calls of the three species are the result of relatively recent evolutionary changes, and might have something to do with ecological or social differences among the species.

Even more intriguingly, the order of a combination call was correlated with the behavioral context in which it was given, raising the possibility that calls with different orders have different meanings. For example, even though African savannah elephants primarily produced roar-rumble combination calls in most contexts, they were more likely to give rumble-roar-rumbles when separated from their group. If elephants can convey different messages by recombining roars and rumbles in different orders, this would be a remarkable example of communicative flexibility. It might even help us understand the conditions that led to the evolution of grammar in our own species long ago.

As with most scientific endeavors, our study has left us with more questions than it has answered. Why do African forest elephants order their combination calls in such a markedly different pattern than the other two species? Do combination calls with different orders mean different things?  Do calls with the same order mean the same thing in different species? Our analyses suggested that in addition to the clear differences among species in the preferred order of combination calls, there were some differences among populations of the same species as well. Might this be due to culturally learned dialects, such as those found in many bird species? It is my hope that our study will pave the way for future work to address these fascinating queries.

Pardo, Michael A., et al. “Differences in combinatorial calls among the 3 elephant species cannot be explained by phylogeny.” Behavioral Ecology (2019). [Link to paper]