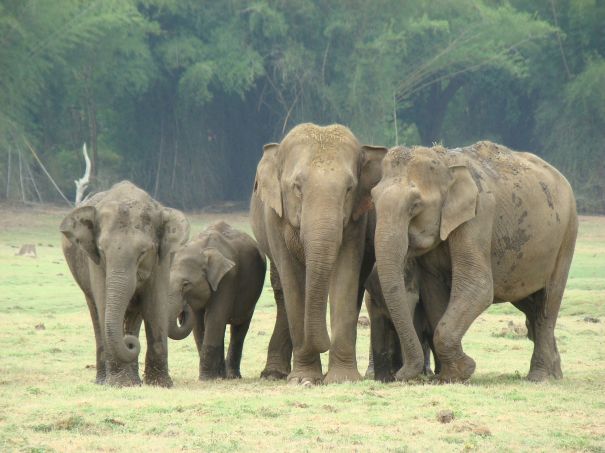 I studied the ecology and behaviour of Asian elephants as part of an ongoing long-term project on elephants, the Kabini Elephant Project, which was started in March 2009 to study the social life of elephants. I worked in Nagarahole and Bandipur National Parks in Karnataka, southern India. Both National Parks are separated by the River Kabini and a dam was constructed across the river in the 1970s. When the dam is opened, receding waters expose the wet ground which supports the growth of fresh grass. As ponds dry up inside the forests in summer, many herds of elephants visit and aggregate along the backwaters area.

Male elephants disperse away from their natal groups when they reach adolescence, sometimes forming temporary associations with other males. Female elephant groups are dynamic, most likely including maternal relatives: mothers, daughters, aunts, cousins, nieces and so on. The group composition and size keeps changing with time. On some occasions, large groups undergo fission and form small groups, while on other occasions, small groups join other groups and form large groups. These “fission – fusion” events are thought to be in response to competition for food. It was found in other species that when food resources are limited or scarce, groups undergo fission and when food resources are plentiful, groups fuse. African savannah elephants show a hierarchical, “multi-tiered” fission – fusion society, where the largest grouping is called a clan. A clan contains family groups and bond groups and is a community that is defined on the basis that females associate more with others within their own community than those outside it. Earlier studies on Asian elephants of Uda Walawe, Sri Lanka by UWERP show a multi-level society, but not exactly equivalent to family groups or bond groups of African savannah elephants (Moss and Poole 1983, Wittemeyer et al. 2005, de Silva et al. 2011, de Silva and Wittemyer 2012).

At the level of different clans, there was no consistent effect of season on group size or associations. A reason could be that there is a constraint on group size in this population (which is why larger and smaller clans have similar average group sizes). How food resources are spaced in the forest may not be very different across seasons (but this is something that remains to be studied). We found that females maintained their associates across seasons and also associated with them to roughly the same extent across years (Nandini et al. 2017).

We also compared the Kabini population (using similar data collection methods) with the Samburu African savannah elephant population and the Uda Walawe Asian elephant population with data kindly provided by the authors of those studies. Of the three populations, the African savannah elephant was the most cohesive, with strong associations between females, followed by the Kabini, and then the Uda Walawe populations. However, the group sizes in the three populations were also different: ~5 females in Samburu per group on average, compared to ~3 in Kabini and Uda Walawe. We were able to show that there are basic underlying similarities amongst the three populations in female social structure, but the differences in group sizes prevent these similarities from being easily seen. Larger groups formed by the African elephants allow females to associate with many females, thus making them more cohesive, compared to the Kabini elephants (Nandini et al. 2018).

We think that differences in group sizes across species may result from differences in their ecology. Savannah ecosystems offer large amounts of grass biomass, supporting large groups, as opposed to the tropical forests that Asian elephants inhabit, in which food resources are patchy and limited. African elephants also face predation risk from lions and poaching pressure from humans, which may have made them more gregarious and cohesive. Among Asian elephant populations, Kabini was more cohesive than Uda Walawe. This possibly stemmed from the large scale historic disturbance that Sri Lanka went through, which resulted in killing of thousands of elephants in the 19th century. Such disturbance is likely to have affected the associations among female elephants in Sri Lanka. But more studies on other populations are required to test this idea.

How To Study Social Networks in Elephants >