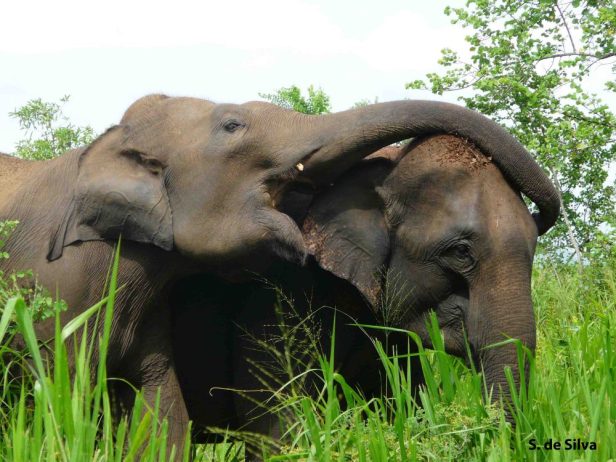 A young female named Right Hole puts her trunk over the head and back of another female of similar age with the ID [458]. The two are from different social groups, though they know each other.

Elephants are commonly thought to live in matriarchal societies which rely on the strong leadership and wisdom of elders, with strong age-based dominance hierarchies. Our new study in the journal Behavioral Ecology overturns this view, finding that in fact Asian elephants, unlike African savannah elephants (Loxodonta africana), do not exhibit clear dominance hierarchies or matriarchal “leadership” [1].

Our study compared the network properties of dominance interactions exhibited by adult female Asian elephants in Sri Lanka and a similarly-aged cohort of female African savannah elephants in Kenya.  We found that Asian elephants showed less than a third the amount of dominance behavior as their African counterparts. As a result, it was impossible to construct orderly hierarchies among individuals, in contrast to the African females, who did show such a pattern. We then went further to test whether there might be some linear order among individuals of different age groups or social groups. We found that while there while older individuals did tend to ‘win’ confrontations more often in both populations, Asian elephants showed a greater tendency for reversed outcomes where younger individuals dominated older ones. We also showed no real order by social group. In contrast, African elephants showed significant order by both age and social group.

The dominance network of Asian elephants (left) is more sparse than that of African elephants (right) and has proportionately more age-reversed dominance (red arrows). Each circle is a female aged 10 to 60+ years, with larger circles being older individuals and colors representing social groups.

What might explain these differences? The classic view of elephants is based on decades of research on African savannah elephants, in which females and calves form highly cohesive families with very clear age-based dominance hierarchies.  Such societies are favored under the ecological conditions savannah elephants typically find themselves in, namely where rainfall is unpredictable and resources are widely dispersed. These environments also contain large predators and there is a lot of competition among elephants for access to the best and safest areas. Knowledge of resources, potential competitors and predators may be built up over many years, with the presence of older individuals benefiting younger ones. But what if the environment is wetter and more predictable, with fewer predators to worry about? Asian elephants live in more productive and predictable environments where food and water were historically not difficult to come by. The studied population, having evolved on an island free of large non-human predators such as tigers, also had little to fear. Perhaps as a result, they show more dynamic social relationships than African elephants [2]. We hypothesize that this frees up individuals to make their own movement decisions, without needing to rely on the knowledge of others, or tolerate being dominated by them. We call this phenomenon “ecological release”.

One wonders then why elephants exhibit any dominance behavior at all, and how they resolve conflicts in the absence of clear hierarchies. We suggest that Asian elephants use dominance signals for a different purpose: establishing who belongs in the social group, and excluding those that do not. Even though Asian elephants have very flexible social relationships [3] that can vary from day to day, it doesn’t mean they are completely unselective about their companions – on the contrary, they typically associate with only a specific subset of animals, and can show outright hostilities when they run into someone entirely unfamiliar. Rather than establishing dominance hierarchies, which are impractical between social groups that rarely interact, Asian elephants probably simply avoid unfamiliar individuals.


The flip side of this is that when elephants are packed into ever smaller areas due to loss of habitat, it may escalate the potential for conflict in a species that is otherwise averse to confrontation.  This might explain some dire observations of the outcome of management interventions. For instance, in southern Sri Lanka several hundred elephants – including females and calves – were driven from their home ranges into a National Park in an effort to reduce human-elephant conflict and make way for development. While the result is not well-documented, many animals reportedly died as a result. This mystified wildlife authorities as well as conservationists, who saw no apparent shortage of food or water in the National Park. Yet elephants languished at the perimeter of the park, trying to make their way back home, apparently choosing death by starvation over exploring the new area. Our findings suggest a possible explanation – even though elephants are not territorial, strictly speaking, their daily survival must depend on finding adequate food and water while carefully avoiding conflict with other unfamiliar elephants. When driven into a wholly unfamiliar area, even one with plenty of food and water, it’s possible they couldn’t penetrate the invisible social barrier presented by the resident elephant population.

Asian elephants and African savannah elephants belong to two different genera, separated by six million years of evolution. That’s comparable to the split between humans and chimpanzees!  This comparison gives a fresh take on socioecological theories which have long sought to explain how a species social structure is related to its environment.