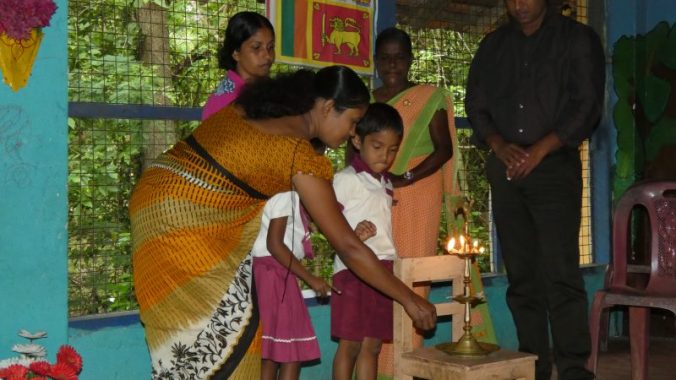 Our first stop was Samagi preschool, where we were pleased to see a very large contingent of parents attending. Together with the teachers, we took turns lighting a tall brass oil lamp, a traditional symbol of good fortune and prosperity in Sri Lanka. We were a bit nervous when they tried to hand the kids a match, but then it was decided it might not be quite such a good idea! 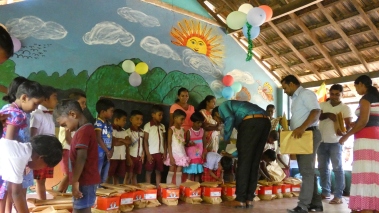 At the year-end concert in December, we gave each of the kids a little set of school supplies.

After the warm welcome provided by head teacher Ms. Diuniwathi, one of the mothers spoke on behalf of all the parents and related their appreciation for the support provided for their preschool, which had never received anything of the sort since it was first established 30 years ago! They obtained a cupboard and shelves, first-aid box, and desks and chairs for 20 children. 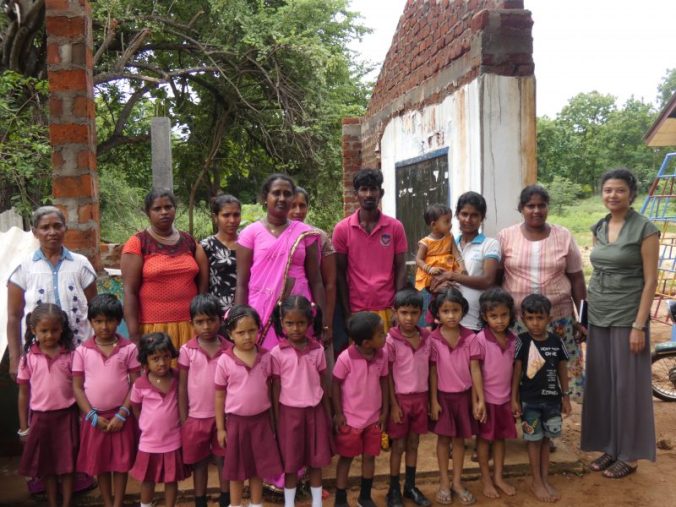 Samadhi preschool’s building was being torn down and completely rebuilt, thanks to their new water supply.

Samadhi preschool had a singular request, which was to get a water supply. Although they were not isolated, and there was no shortage of water in the area, they simply could not afford the Water Board charges to actually have a water supply! As a result the parents had to bring the water in large canisters. Ms. Tharangani detailed the hardship this had caused for the more than 7 years she had been the teacher. We were incredulous that such a problem could even exist, it felt absurd. 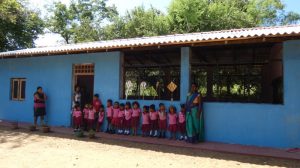 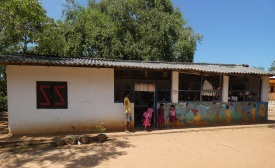 The old building for Samadhi.

With our support, they were able to get their water supply. They were also able to erect a water tank and install plumbing for the toilet and kitchen sink. They then used the water supply to renovate their preschool building, with their own resources, which we were so happy to witness (the new building was opened in January 2020, pictured). 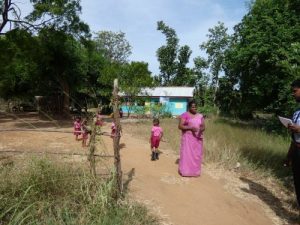 Visakha had no fence or gate.

The next stop was Visakha preschool, which was in need of a fence and gate. Sitting next to a busy road, the fence had previously consisted of sticks and wooden posts. The teacher, Ms. Sriyani, worried that a child might run onto the road and cause an accident. They therefore invested in a chain-link fence, with sturdy metal gates. We were greeted with a ceremonious “ribbon cutting” and betel leaves presented by the children. As it was approaching lunch time, we chatted with the parents as the children got ready for their meals, learning about their concerns as we had done at each of the previous locations. 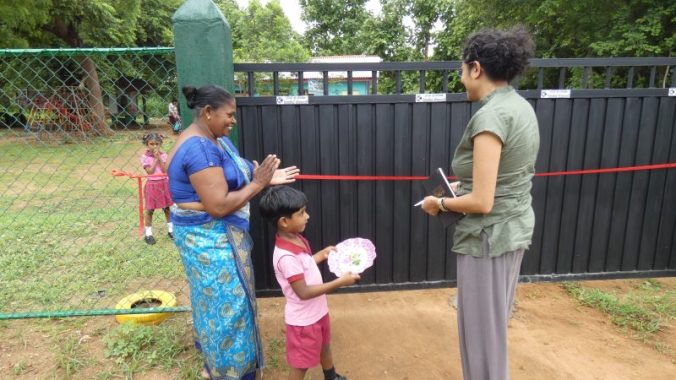 Inaugurating the new gate at Visaka.

Our final preschool was Nuwanesa, which had also put up a new fence. Like Chuti Tharu, it too was very close to a forest edge. Unfortunately, their new fence had already been bent in one corner by a curious elephant, much to the dismay of their teacher Ms. Leelawathie. We advised her on the steps required to get compensation from the government to get it fixed gain, reiterating what Naveen, the Ranger, had said the day before. Inside the classroom, they had obtained a new cupboard and water filter with our assistance. We were served a lovely tea-like hot drink, made from a type of plant native to the area. It had the vague appearance and smell of coffee, but none of the caffeine-induced after effects. This was a great example of the kind of thing we hope to learn more about, in our search for alternative crops! 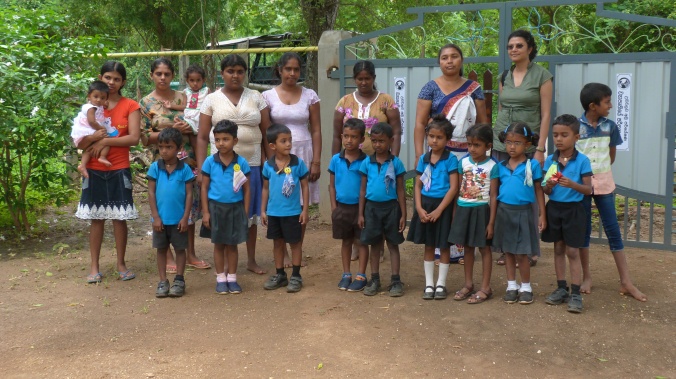 The new gate at Nuwanesa. 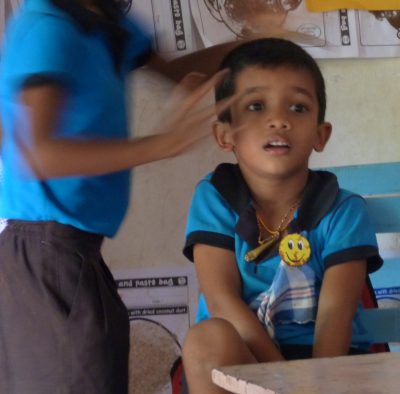 “We see lots of elephants all the time!”

The children at Nuwanesa were very talkative, one little boy declaring that he regularly saw elephants from his house.

“And what do you do when you see them?” we asked. “What does anyone do – do they try to chase them away or do they stay quiet?”

“I stay quiet and as far away as possible!” he said, sensibly. But  admitted that he liked to watch – from a safe distance.

As with the day before the tales of these children, who were eager to talk about the wildlife they saw around their homes, was a reminder of why we were here. These communities are on the front lines of conservation, and the stakes are high.