It was a perfectly framed shot of a young elephant breaking the electric fence, perhaps even looking a little gleefully smug about it. Still this was a relatively common incident, and while it was nice to catch at least one culprit in the act, the observation was hardly a breakthrough (pun intended). But as we watched on, it was what came next that was so beautifully, endearingly meaningful that we couldn’t help watching again, and again, and again.

Before we get to that, let’s back up.

Insofar as there was ever anything that qualified as “wilderness” since the arrival of our fire-wielding ancestors on the scene just over half a million years ago, these wild places surrounded us.  They were full-bodied, seemingly unending, and the creatures within them moved at will wherever they pleased.

But as humanity has continued to expand, such places have thinned out. We are now struggling to hold on to the bones and hearts (here are examples from North America, Asia, and Asia again). This in itself is said to be ambitious. Where such places contain species that could pose a risk to us, or where we are simply trying to define what belongs to “us” vs. what belongs to “them” (by which, we mean everything that is not human), we like to put up boundaries.

And so electric fencing has been embraced in Sri Lanka as a cure-all for keeping elephants away from people and vice versa, on a cramped island where the density of both is unsettlingly high.  Probably the most visibly effective fence that ever gave a pachyderm pause existed along the southern boundary of Udawalawe National Park. Here were many splendid photo opportunities of seemingly idyllic coexistence between people and elephants as a growing number of the latter patiently and politely waited for hand-outs from passers by, even as the temptation of sugar cane plantations lay on the other side of a busy two-lane highway. It was so effective that at first the authorities only bothered to turn it on from 6pm to 6am. During the daytime, passersby lingered around, oblivious to the fact that there was in fact no electricity protecting them. Bit by bit, segment by segment, the lengths of fencing grew.

The original fence beggar stands calmly behind a group of holiday-makers, separated by a nearly invisible wire. What they don’t know, is that the electricity wasn’t even turned on.

Wildlife officers consider what to do about begging elephants, and escalating break-outs.

Things changed in 2010 with the arrival of Ghost, a one-tusked bull translocated into the park for causing mischief elsewhere. Tusks being non-conductive of electricity, he made short work of the fences and also the sugar cane. Soon afterwards, others followed his lead. Ear-splitting bangs could be heard nightly, echoing like a miniature war zone, as people tried to drive them away with crackers. But while Ghost was experienced in stealth raiding, the others were more brazen. The electricity now needed to be kept on 24-7, they tried their luck in broad daylight.  It didn’t end well for at least two young males – one was killed falling into a well and another was first shot and then electrocuted.

Out of desperation, the Wildlife Department set up a secondary fence line a few hundred yards inside the perimeter. The objective was to remove direct handouts and discourage temptation for both people and elephants.

For a while, it seemed successful. Trees shot up in the no-man’s land and the interior of the park was shielded from view. The beggars dispersed back from whence they came, save for the placid yet doggedly stubborn Rambo.

Encouraged by this, a more ambitious plan was devised to fence portions of the Park’s interior, with the intention of allowing grasses and trees to recover from elephant feeding pressure.

This elephant is strolling along one of the interior fences.

But unfortunately, the scale of these fences, and their position inside a quickly regenerating monsoon forest, made them nearly impossible to maintain. Also, they were an inconvenient nuisance to elephants and vehicles alike, requiring substantive de-tours to pass around. So of course, the elephants broke through. And this is what is now happening along all parts of the electric fence, inside or outside the park. It became common to see downed posts and tangles of wire lying around. Elephant calves are now growing up with fences as playthings. 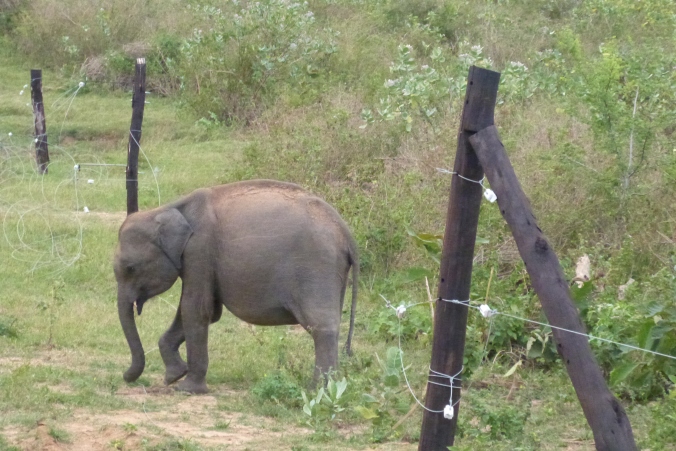 A calf of about 4 years old toys around with the current-free wires.

Which brings us to the story at hand. Our camera traps were set up as part of a collaboration with the Wildlife Department to evaluate the efficacy of certain planned electric fences. Which is why this clip is so striking.

A young male wanders up and breaks the fence with a single confident, practiced stride. He pauses briefly to relish his success and ambles off. But then nearly an hour and half later comes a young female. Alone, and not yet fully grown, she’s obviously curious about the broken post, but reluctant to cross it. She sniffs, possibly even touching the wire, which may or may not have electricity still humming through it. She hovers around, feeding, and disappears without having crossed the line. The elephant equivalent of a dutiful, law-abiding citizen.

Of course, we don’t know if at some point she got up the courage to investigate the other side, out of our frame of view. Perhaps she brought her entire family over with her. But what this so powerfully illustrates is that a fence is above all a psychological barrier. It is only by virtue of this psychological barrier that the physical one works. The mind is what matters. How many exposures would it take an individual like this to overcome their hesitation? How many elephant calves are growing up with no reluctance to push these boundaries at all?

Our guess is that this elephant population will soon be fully habituated to electric fences, to the detriment of those who use them as a last line of defense to protect their lives and livelihoods, given an elephant’s considerable lifespan. Scenarios like this are probably playing out the world over. In Southeast Asia, where oil palm companies are trying to protect sprawling plantations. Electric fences have been tried and defeated. Likewise in India. But that doesn’t prevent them from trying again.

People always seem to think that it is simply a matter of imagining a better design, something more robust, something that stands up to all manner of abuse. A better and better and better mouse trap. This is not the way forward. Animals will try to overcome barriers to get where they need to be. We have to re-imagine these fragmented bits of landscapes as parts of a greater, fuller, functional whole.

We have some ideas for how that would look, and you can bet we are working on it. Care to support us? Join our cause.

4 thoughts on “Mind Over Matter”