Before we start, a disclaimer: there’s a lot of bad news out there. We’re not going to amplify it by reposting here. But we thought it would be nice to highlight interesting news every now and then. Things that give us hope (#ElephantOptimism) and/or make us think.

Here are a couple. 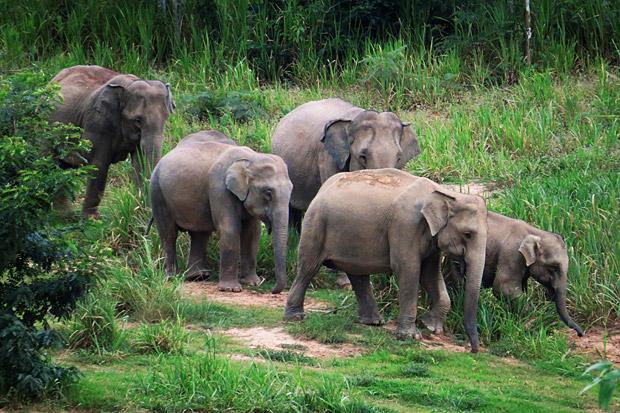 We recently published the results of a study done back in 2014 with Dr. Lucy King of the Elephants and Bees Project showing that Asian elephants are not very keen on bees (read the blog post here).  But of course, plenty of people had heard about the earlier studies with African elephants and had already jumped to the final step – beehive fences as a means of deterring crop raiding.

Bangkok post reports that national parks around Thailand are already poised to use beehive fences on a large scale, in response to escalating human-elephant conflict as a result of what appears to be a sudden increase in the elephant population in some areas. The well-known Kui Buri National Park will be around the first, starting with 40 boxes distributed among a few residents of the area.

This article gives us pause for several reasons. First, bee-hive fences are typically applied at small scales – individual small holders. But each box has to be an entire colony. A fence means multiple colonies, and there’s going to be a limit on the number of bees an area can support, based on the local flowering patterns.  So far, we have not seen any systematic studies of just what this carrying capacity might be. So, while we wish this program success, we will be very very curious about the outcome.

But second, the article states:

“It is projected that the number of elephants could rise to 600 in 2027 (from 230 this year) across both national parks.”

That works out to about 41 elephants per year, and since elephants are not fruit flies, this is unlikely due to reproduction. If the projection is accurate, the other obvious question is – where are all these elephants going to be coming from, and why are they suddenly turning up there (anyone with ideas, feel free to comment)?

This next post by The Nation goes a bit deeper – why are elephants coming out of the forests in the first place? An astute wildlife officer noticed that elephants’ venturing out of sanctuaries and forests appeared to have something to do with lack of water as well as the palatable food being grown by people next door.

This problem wouldn’t be solved by fences and barriers alone, as their efforts had already shown. Wise to recognize this, authorities are now trying to work out corridors that would provide more long-term refuge and freedom of movement for elephants and other wildlife. The first step towards this, is establishing no-hunting zones. If it happens, it will certainly be cause for celebration. Eventually though, they recognize that changing the crops next to these habitats has to be part of the solution, so that they don’t attract elephants in the first place. We dream that future becomes a reality.