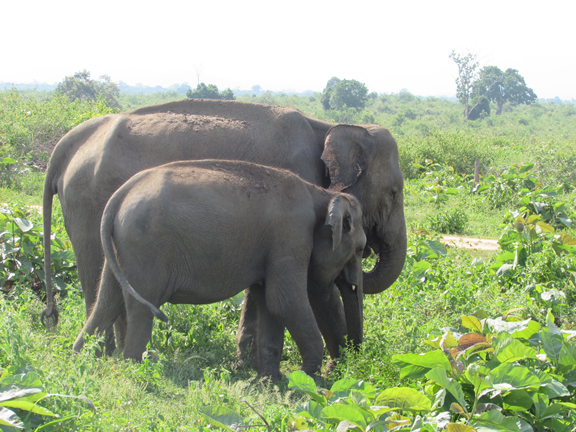 Doing playback experiments with Asian elephants is harder than it would seem.  The basic idea is straightforward:  I want to know whether Asian elephants can distinguish between the calls of familiar and unfamiliar individuals, so I will play back recordings of familiar and unfamiliar elephants and see if the subjects react differently to them.  But in order to do a playback, so many factors must align at the same time.  The right subject must be present, the original caller must not be present, the group can’t have been exposed to a playback for at least a week, the elephants have to be stationary, they have to be clearly visible and within 50 meters of the road, there can’t be any tourists nearby, and all of these requirements must hold true for at least 15 minutes straight.  Sometimes, it seems about as likely as having your winning lottery ticket reduced to cinders by a lightning bolt.

It is 3:00 PM on May 23rd, almost two months after my custom-made loudspeaker arrived in Sri Lanka, and at this point, I have completed exactly zero playback trials.  Still, my luck is bound to change eventually, or so I hope.  We pass through the entrance gate and have scarcely traveled half a kilometer before we see Bashi and a juvenile female grazing at the edge of the road.  Bashi is a member of the B group, one of the first groups of wild elephants that I ever saw.  Fortunately, back in March I managed to record a clear rumble from Bali, another member of the B’s, which means that I can use Bashi as a subject.  (If I didn’t have any recordings from the B family, then I wouldn’t have any “familiar” calls to test Bashi with).

We are traveling in two jeeps: one vehicle to carry the 458-lb “elephant” speaker, specially designed to produce low-frequency sound, and one vehicle from which to observe the elephants.  I wave Sameera forward, and he positions the speaker jeep 50 meters ahead of Bashi, with the rear end facing her and the back door ajar.  Kumara and I inch forward in the other vehicle to get a better view.  After Sameera and Kumara bring the jeeps to a halt and cut the engines, I wait, tensely counting down the seconds on my watch.  I want to wait at least 5 minutes before starting anything, to ensure that Bashi is relaxed and acting normally.  One minute passes.  One minute thirty seconds.  Two minutes and counting…. Then Bashi starts walking towards the speaker jeep.  All my playback trials must be done as close to 50 meters from the subject as possible, to ensure that the sound is always at a comparable volume from the subject’s perspective.  By now Bashi is less than 30 meters from Sameera’s jeep, so we have to reposition.  She crosses the road and when she appears to have stopped moving, we start up the vehicles and re-maneuver to a better spot.  Now we have to wait another five minutes.  Praying that Bashi will stay put, I watch all five minutes tick by.  Still she hasn’t moved.  Quickly, I call Sameera’s cell phone and tell him to wait another five minutes for me to film Bashi before playing the sound.  I need to have a good record of her behavior before the playback as well as after it.

I flick open the camcorder and train it on Bashi.  Almost immediately, she ambles behind a tree.  Of course, I think.  Murphy’s Law in action.  Should I abort the trial and reposition?  Or should I continue and hope she moves?  I make a snap decision to opt for the latter, because I’m worried that moving the jeeps again would scare her off completely.  That turns out to be a mistake, as it quickly becomes clear that Bashi has no intention of coming back into view anytime soon.  I can still see the outline of her body, but don’t have a clear view of her head and trunk, which are the most expressive parts of an elephant’s anatomy.  But before I can change my mind and call off the trial, the sound rumbles forth from the speaker.  From what I can see, Bashi doesn’t seem to react much.  She takes one step forward, but then resumes grazing.  Sameera later tells me that she shook her head slightly upon hearing the sound, but that was it.  I wonder if this lack of a response had to do with the angle of the playback.  Bashi had a clear line of sight to the jeep and the area beyond, and it may have been obvious to her that there were no elephants in that direction.  Definitely something to keep in mind for future trials.  Alternatively, her lack of response may have simply been due to the fact that in this particular trial, we played back the call of an unfamiliar elephant, so she may not have had much motivation to respond anyway.  Only additional trials will tell.

More importantly however, I have now learned the crucial lesson that visibility is of utmost importance.  Without a clear view, it is all too easy to miss subtle behaviors like Bashi’s little headshake.  Although I am disappointed not to have a clear video, I feel a strange sense of accomplishment.  This is the first playback trial that I have carried out to completion, and that certainly feels like progress.  Hopefully it represents a turning point, and will be followed by many, fully successful trials.