Baretail (right) with the Bs at the Uda Walawe reservoir.

Baretail is a female elephant in Uda Walawe National Park (so named as her tail has no hair). She is a member of ‘B’ unit, because ‘B’ is the first letter in names – e.g. Baretail, Batik, Bali, Bashi, Blanche, Bitsy and Bianca. Bianca was the oldest, and may have died. Baretail had a male calf in 2011 but he died because we think he was born premature. Thereafter she was alone, but she always communicated with her other companions. Sometimes she cared for the calves of others. For the past five months the unit seemed to be ‘led’ by Baretail (even though she was not the oldest). She was always in front, the rest followed her, and she chased other groups. But for the last couple of months we saw her further away from her unit, sometimes more than 500m. I think she is not the ‘leader’ anymore as she may be pregnant again. Therefore she is always separated from her group. We can know by next year whether she is pregnant. I hope she will be a mother once again.

By US Weerathunga & S de Silva 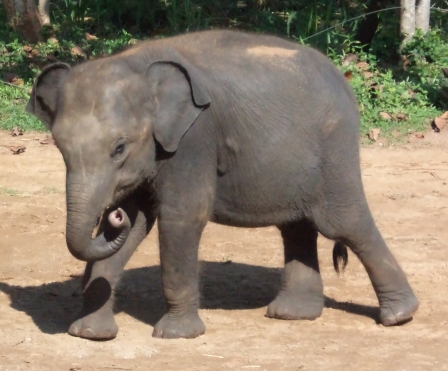 ‘Pokunu Raja,’ a calf rescued by the ETH after falling in a well.

Elephants encounter a lot of dangers due to human activities when they venture beyond the confines of protected areas such as national parks.  In an attempt to monitor any conflicts, injuries, or deaths involving elephants beyond the borders of Uda Walawe National Park, the research team posted a series of signs along the electric fence line which contained a location number and our phone number. Each location was marked with a unique GPS point. The idea was for people to voluntarily report any incidents involving elephants along with the nearest GPS point, so we could map what happened and where and gain a better understanding of the patterns of conflicts.  We didn’t anticipate, however, that this low-tech system could also facilitate good news. 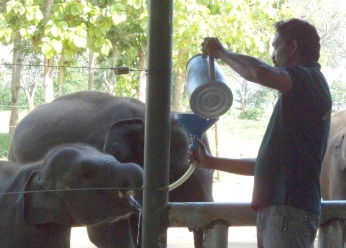 Pokunu Raja getting his milk at the ETH.

Last August a farmer from the Pokunutenna area called to report that an elephant calf had fallen into a well nearby.  The baby, who appears to be between 2-3 years old, was rescued thanks to the swift actions of the park warden, Mr. Pathirana and Dr. Perera, veterinarian from the ETH (Elephant Transit Home).  Pokunu Raja, as he was nicknamed, arrived at the ETH three days later where he is doing well and being looked after until he is old enough to be released again.

Is it always a good idea to rescue calves?  Not necessarily – while it’s tough to watch an animal in trouble, sometimes it’s just the course of nature, and interference can do more harm than good; so we only intervene when there are obvious signs that human activity was the cause of distress, as it clearly was in this case.