We’ve been on a roll this last week.  Or maybe the elephants have.  Either way, I’ve heard far more vocalizing in the past week than in both of my first two weeks combined, and have managed to record some of it as well.  I hope for our luck to continue as we gather our equipment this morning and pile into the jeep. 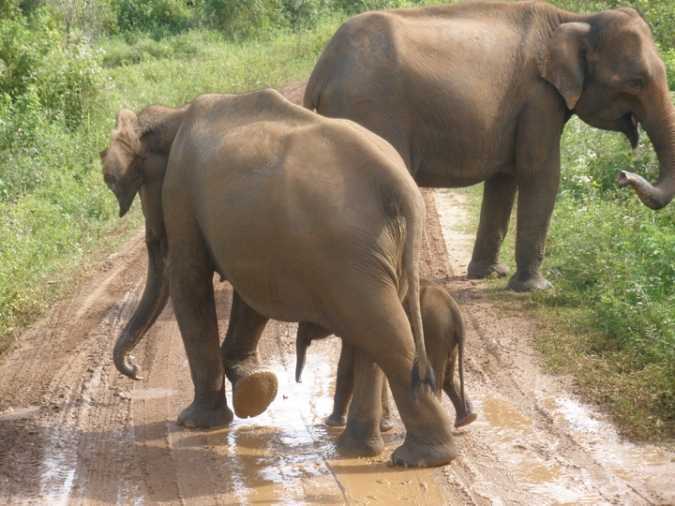 Before long we see [474]’s group, and almost immediately hear a rumble.  Unfortunately Kumara and I are still busy setting up the recording equipment, but I wait in the hopes of catching another call.  As I watch the elephants, I notice that they seem unusually “touchy-feely” today, for lack of a better word.  Two females rub their heads together, then another pair does the same, and a few minutes later yet another elephant rubs her massive gray flank against her neighbor’s.  I wonder why they do this.  Perhaps body rubbing is to elephants as grooming is to primates—a sort of social glue to help them form and maintain relationships.  Or maybe they do it to scratch itches.  Maybe both.  As these thoughts run through my head, we bump down an overgrown sidetrack to follow the group as they move on.  Suddenly, an elephant roars.  Luckily, the microphone is ready this time, but I am not able to identify the caller.

As the sun climbs in the sky, we leave [474]’s group, and continue on in search of other families.  The familiar slate-colored hump of an elephant’s back appears over a tall shrub, and soon we see the unusually thick tail of a female named—what else?—Fat-tail.  Several jeeps full of tourists are already sitting by the side of the road, their occupants eagerly snapping photos.  Nearby, two juveniles play, wrestling with their trunks.  One pushes the other backwards, and they disappear behind some bushes.  A few minutes pass, and then a loud rumble punctuates the air.  As I quickly point my microphone in the direction of the sound, two more rumbles follow.  Too bad that all the elephants in that direction are completely obscured by vegetation, so we have no way of knowing who gave the calls, or whether anyone responded to them.  It’s probably just as well, since one of the tourist jeeps is running its noisy engine, which will significantly decrease the quality of my audio recording.  By now the sun is really beating down, and towering cumulonimbus clouds loom ominously on the horizon.  Two signs that we might be in for a shower this afternoon.  I manage to record a few more roars, but again, the callers are out of sight.  So many calls today, but without the behavioral contexts I probably won’t be able to use any of them in my analyses.  Well, if I had gone for an easy project I wouldn’t have gotten to be here in the first place…

Now it is almost eleven o’clock.  The elephants will want to stay hidden in the shade during the heat of the day, so it’s time for our midday break.  As we pass over a small bridge on our way out of the park, Kumara spots a flap-shell turtle basking on a rock in the stream below.  We pause to watch.  The turtle’s neck is long and supple, terminating in a curious triangular head.  Its shell is smooth, and I know that if I touched it, it would feel leathery, not hard.  It seems alien and exotic compared to the more box-like species I’m used to at home.  I pull out my camera, but the turtle slips into the water in the blink of an eye.

We start to head towards the park gate, but on a whim, decide to double back and investigate another road, just for a moment.  Our whim produces a windfall!  We spot a Changeable Hawk Eagle perched less than two feet off the ground in a low shrub.  It seems to epitomize predatory efficiency as it scrutinizes the ground below with its intense raptor gaze, searching for a meal.  I watch the eagle’s long crest swaying slightly in the breeze as it swivels its head back and forth, eyes raking the grass for a hapless rodent or snake.  As I stare at the eagle in amazement, Kumara taps me on the shoulder.  “Balanna,” he whispers, “look.”  There, right in front of our vehicle, two gray mongooses are playing, tumbling over each other as they bound back and forth.  They seem totally unconcerned with either the eagle or our jeep.  One flops down in the middle of the road and yawns.  Then it pops up again and they boisterously caper off.  Wow.  What a way to end the morning. 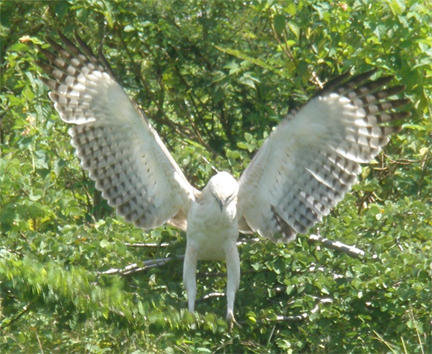 One thought on “On a roll”