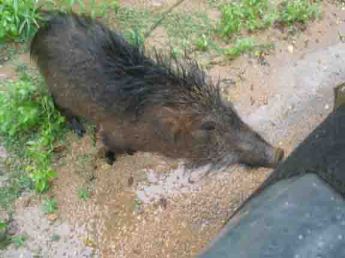 A breathtaking expanse of bushes peppered with trees.   That is my first impression of Uda Walawe National Park as we pass through the entrance gate in the early hours of the morning.  The shrubs grow densely packed on either side of the ochre-colored road, like a vertically challenged forest.  They are interspersed with teak saplings, a reminder of the days when this park was a timber plantation.  Towering banyan trees soar above the surrounding vegetation, peacocks perched in their uppermost branches.  In the distance, I can see the blue mountains and waterfalls of Nuwara Eliya, and above them, a steely sky striated with rain-laden clouds.  A grey mongoose crosses the road ahead of us, stopping briefly to stare at our jeep before disappearing into the wall of greenery.  Flocks of Common Mynas and Spotted Doves spring into the air as we rumble past.

Excitement builds in me as we move deeper into the park.  After months of preparation and applying for travel grants, I am finally here.  I have just completed my first semester as a Ph.D. student at Cornell University, and I am visiting Uda Walawe to help me determine if this will be the right site to conduct my doctoral research.  I am fascinated by elephants and their strange vocalizations, many of which are so low in pitch that they are inaudible to the human ear.  I hope to eventually discover how elephants use these calls to communicate with one another.

Uda Walawe has the reputation of being the single best place on Earth to view wild Asian elephants, and it does not disappoint.  Before long we encounter a family group grazing nonchalantly a hundred meters to our right.  We stop and switch off the jeep’s engine to observe them.  Sameera explains that the elephants can be identified by the unique shapes of their ears, and points out various individuals.  For example, an adult female named Indika has a characteristic tear in her right ear.  I practice identifying the different elephants, and quickly realize that it is going to take me a while to learn everyone by sight.

It begins to rain, and we close the roof of the jeep.  As we drive on, Sameera suddenly signals for the driver to stop.  “Sambhur”, he breathes, and points.  I feel extremely lucky.  Sambhur deer are a rare sight in Uda Walawe, and I have seen one on my first day!

We move into a more densely forested area of the park, where trees predominate, and our luck with spotting wildlife continues to hold despite the rain.  We see a troop of Hanuman langurs, several herds of spotted deer, countless spectacular birds, and plenty of elephants.  Suddenly, a wild boar appears, and charges toward our vehicle.  We drive off and the boar follows, trotting after us with amazing speed.  At first I think that the pig is aggressively threatening us, but each time we stop, he stops too, and begins to calmly root around in the soil.  When we move again, he follows.  At one point he even stands up on his hind legs and rests his forelegs against the stationary jeep, trying to peer inside.  I shake my head in wonder as I try to fathom what could possibly be motivating the odd behavior of this animal.

As we are heading back, we find another group of elephants literally blocking our path.  Some of them are so near that they could reach out and touch our jeep with their trunks if they so desired.  I marvel at the opportunity to watch them at such close quarters.  A large female standing directly in front of our jeep produces a low growling sound as she regards us.  I wonder what this call means to other elephants.  What information does it contain?  I hope I will be up to the task of finding out.