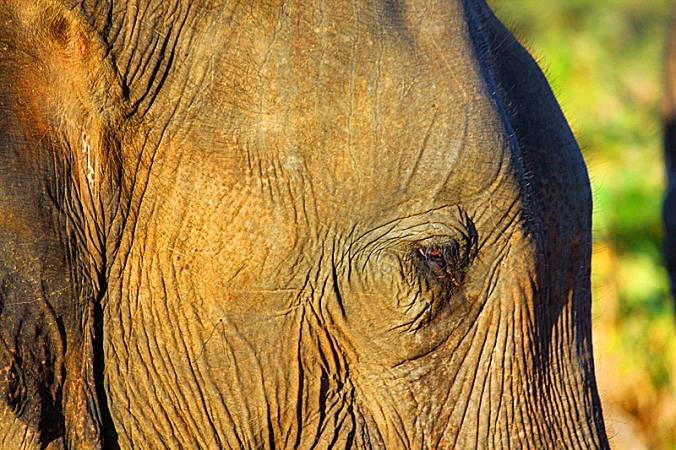 This is Amber.  She is a grandmother.

She has three daughters.  They are all comfortably married (more or less), prefer grass to grapes, and have suffered their share of life’s sorrows and joys.

Undeniably the pride and joy of the household, at this moment, is Little One.

Little One is celebrating her first month on this planet.  Her mother and aunts are wildly protective.  As the Land Rover draws too close, they flank Little One on both sides, so that she is saved from our glances.  Still, her curiosity cannot be suppressed, as she steals a glance at us from under her mother’s belly. 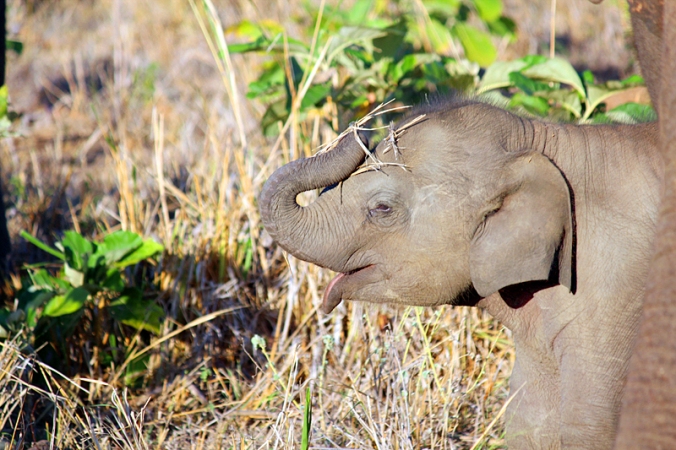 I have come from halfway across the world to meet these elephants.  Basically I’ve dug a hole to China, having come from Los Angeles to Sri Lanka, and passing over the North Pole (!) in the process.

Why?  As I’m sure you all know, the Sri Lankan elephants are endangered.  Their numbers have been halved in less than one century; there are only some 200 tuskers left on the island (it is believed).

When you watch the elephants, everything smalls in comparison.  They are such gentle creatures.  Padding through the grass, each foot gently presses the ground, like a cupped hand knowingly supporting an infant’s head.  They are such gentle giants.  Pulling out strands of grass, they seem to embrace the grass with their trunks, before letting the land’s offering enter their placid mouths.

You know when you have done something foolish.  If a grandmother circles her daughters and raises a trunk to bellow, you know that you have come too close to a family secret.  If Little One pulls up some strands of grass and sprinkles them on her head, and smiles—and her grandmother laughs—you know that the little straw hat she has made for herself, is nothing but adorable.

They are perhaps the world’s best measure of right and wrong. 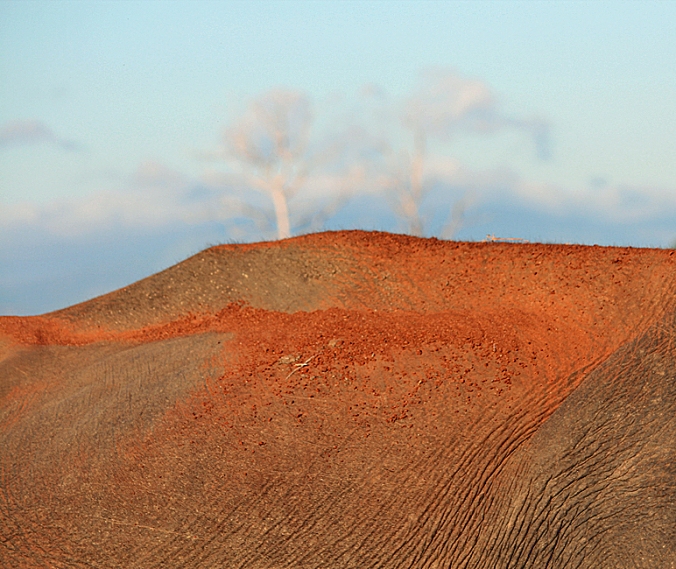 The elephants are not just giants passing over a landscape.  They are the landscape.

Arriving in the park, I asked my guide when the rains would begin.  Not quite understanding my English, or possibly comprehending the meaning of my question more than even myself, he simply responded, “Rainmaker.”

I zoom into the humped back of an elephant with my binoculars: they are hills like red elephants.  Two bone-ivory trees sprout from the aliya’s skin.

Coming to one of the shallow lakes that are all that remain of the spring monsoon, I am reminded of the Hindu tirtha.  A tirtha is a shallow body of water — a lake, an inlet, a river crossing—at which point the spirits converse.  It is where matter meets the divine.

At this quartz-blue lake, I watch a flock of painted storks staring down at the glittering water, their wings tightly kept to their sides, fully aware that some great spirit is about to arrive.

Then I see him — a solitary male, perhaps the husband of the mothers, wending his solitary way.  He uses his trunk like a walking stick.

At the lake’s reflection he pauses.  Those rubbery ears, those tender ivory tusks of an unborn son, those daughter’s eyes.  The storks wait with him at the margins.

Somewhere, a shot cries out.

He enters the water.  He shudders a little.  The water pours from him.