I spend a lot of time looking at elephant photos.  Now and then, I see something that makes me smile.  I just came across a set of pictures from back in May of 2009, which prompted this post.

One of the neatest things about the elephants at Uda Walawe is how habituated many of them are.  What does habituation mean?  When studying an animal’s behavior, it’s important that the presence of an observer doesn’t change its behavior.  It has to go about its business as if you weren’t there – or at least, not minding your intrusion.  Unhabituated animals are fearful, and we can easily tell that some of the elephants in Uda Walawe are not used to people at all.  But others we know very well – and maybe, they know us too?

The S unit is one such group.  The ‘S’ stands for Seenuggala, which is the name of a little reservoir inside the park around which we frequently see them.  This is one of the largest social units in our study.  One hot morning in May of 2009, we came across them scattered about under trees trying to avoid the sun, as elephants do in the middle of the day.  We ourselves pulled up to some shade by the side of the road, from where we could watch them.  We knocked off the engine and waited.

The ellies and we, escaping the heat beneath the same tree. 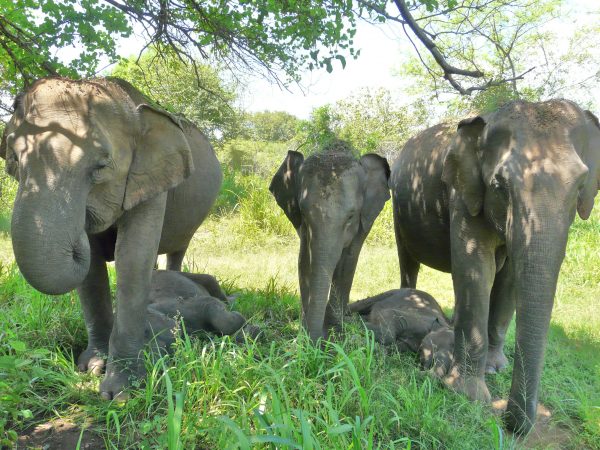 Sarika (left) and Sandhapani (right) each with a gray lump of a calf underfoot.

Two adult females and their calves ambled over to us eventually and stood watching.  One was Sandhapani, who we suspect is one of the two oldest females in this group, and has a boisterous male calf almost as big as herself.  The other was Sarika, a younger female with very striking nearly symmetric branch-like veins in both ears and two calves of her own.  After contemplating us for a while, the little ones decided it was time for a nap and lay down less than a meter from us, while their mothers stood drowsily by.  It’s always the littlest ones that are the first to go. It may seem that elephants, like horses, would sleep standing up.  Often, they do nap on their feet.  But when they feel really really safe, they collapse in a heap and sleep on their sides.  Even the grown-ups. The most moving demonstration of this trust is when an animal drops its guard long enough to allow itself or its young to fall asleep in your presence. 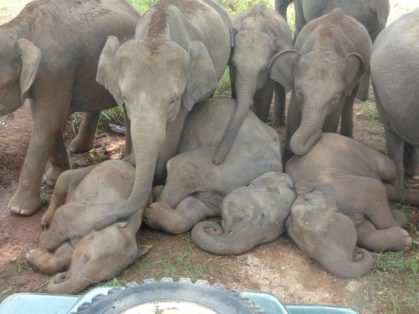 Elephants sleep with their sensitive trunks curled up safely and tucked in tight.

Sometimes, you get stuck!  This is what happened with the Ts.  As usual, we were at the tree first.  But Tamara and her companions decided that this was the best tree around for them as well, and before we knew it we were surrounded by a gaggle of sleepy pachyderms.  The calves went down one by one until there was a neat roadblock.  They looked so peaceful that we hated to make the slightest noise let alone start up the engine to be on our way.  The ones standing up rested their trunks and feet gingerly on those lying down, fully aware and careful not to step on one another.  And so we sat there and quietly reveled in the pleasure of watching them sleep until finally (to our relief) they roused themselves and departed.

Sharing shade is a big deal because good shade is in short supply.  Only animals who are on good terms with one another share space like this and the pushier individuals score the best spots.  We feel quite honored that they choose to share shade with us!  We never come up on sleeping elephants though, because that’s sure to disturb them.

The elephants inside the park lead a charmed life.  And we are privileged observers, to participate in these intimate moments. Outside the parks, however, wild Asian elephant herds are impossible to watch at all because they are so wary of people.  The S group itself bears the marks of human activity – Sandhapani’s rear left foot has scars from a snare, long since healed.  Earlier this year I wrote about another injury on a juvenile from this herd.  They may not know it’s people that did this.  They hear gunshots too – and we have heard it side-by-side with them.  But they may not know it’s people that are responsible for that either.

When I see the elephant at peace, it makes me wish we could all see them this way.  It makes me want to work hard to protect this peace, and pay back the trust they’ve innocently placed in us. 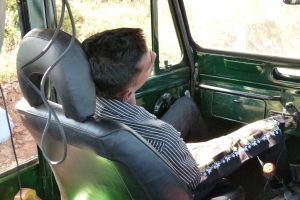 Elephants are not the only ones taking naps. The park’s trackers use their outing with UWERP as a chance to catch up on their own sleep.