Given the previous post about what shall now infamously be known as the incident of 2011, I thought it would be nice to lighten things up by sharing our other experiences with males in musth. Moreover, this is about one of those moments every scientist lives for: discovery.

First of all what is ‘musth’?  Musth is a condition that male elephants undergo after their teens which is similar to rutting in sheep and deer, in which males spend most of their time trying to find reproductive females and battling other males for dominance.  Hormonally, it means they are pumped full of testosterone.  Typically a male has to be in very good body condition to enter musth, and the older he is the longer it can last – several months in some cases – and during that time he eats very little.  You know a male is in musth when he shows reddish wet patches on the sides of his temples (just behind the eyes), and dribbles urine.  Oh yes – and he also smells to high heaven (some of us happen to think it smells rather good, musky sweet and thick…but then again, some of us also like the smell of Durian).

While people have known about musth in Asian elephants for many centuries through their interaction with captive animals, it hasn’t been studied much in the wild. The reason for this is that animals in musth have a reputation for unpredictability, which in captivity = danger.  In contrast, musth in the African elephant was only described a few decades ago, but it has by now been very well-studied in the wild.

All of these thoughts were in my head when we first encountered Raja, the emblematic tusker of Uda Walawe.  It was my very second day ever in the park and I hadn’t a clue what to expect.  On that day, Raja gave us a good scrutiny, first peering in through one side of the jeep and then the other.  Not knowing Raja at all (and having an inexperienced jeep driver who was beside himself with worry), we made a hasty retreat that day.  But it wasn’t until two weeks later that I had my most memorable experience, when Raja revealed a secret.

We were watching a group on the old logging road.  We saw the glint of Raja’s white tusk on the hillside, surrounded by a gaggle of adoring females as usual.  We were following our usual strategy of sitting still as a rock.  Ashoka and I had just been discussing how to judge whether or not an elephant truly posed a threat, and what to do about it.  I favored the wait-and-see approach, since it was the only way to find out who was serious.  I bet him that no amount of noise would put off an elephant that actually meant business, but that most were probably bluffing.  We concluded that it was a risk we would only take ourselves, and not if there was anyone else in the jeep – including a nervous tracker.  Raja gave us a chance to test this hypothesis.

The King of Uda Walawe.

He approached us casually, tossing his trunk, and stopped barely a foot away. We could sense indecision about him, as he curled up his trunk like a snail shell.  Ashoka took the chance to videotape him closely, documenting his many battle scars, including what appeared to be a gunshot wound near the ankle that the vets had tried to treat (but he wouldn’t let the vets near).  I could have put out a hand and touched him.  We could hear his cavernous breath, as powerful as a sea breeze.  And then I heard something else… a very very small noise, like a hiccup.  I listened hard – could it be coming from this great animal?  It was so soft.  And behind it came a sound that was almost a purr, so quiet and brief it was almost unconscious, beneath the sound of the wind.  Had I imagined it?  Ashoka hadn’t registered it at all.

It would be two years later until I heard this sound again, from yet another male in musth.  This time there were two males, and they were engaged in a slow-motion dual.  Over the years we’ve witnessed many conflicts, sometimes going on for several days.  It’s a battle of wills – each trying to keep pace with the other, posturing long before any physical contact is made.  We saw them both, but also in the back of my mind something was calling for attention.  It was a hot, still, day ideal for recording.  I hushed everyone and flipped on the microphone… 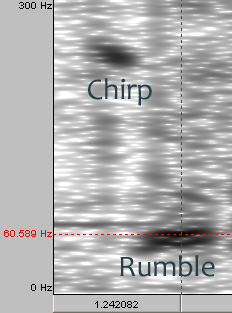 There it was.  A recurring rumble.  Very brief, very low (60 Hz; the lower threshold of human hearing is 20 Hz).  You could mistake it for the revving of a distant jeep.  But it came at regular bursts.  As the elephants moved, it moved.  So, it was coming from one of them.  As he drew near, we heard the little hiccup preceding it, and instantly I knew this was what Raja had done.

I called it the musth chirp-rumble.  As far as I knew, no one had reported such a sound before.  It was very unlike the sounds recorded coming from African elephants.  And it was an exceedingly rare occurrence.  It seems energetically costly – why repeat this call for hours on end, when odor is a much more efficient way to advertise yourself?  Was it a contest call, something like the baboons’ Wa-hoo?  It remains a mystery.

I’d be curious to know if anyone else has heard this call whether in the wild or captivity, and in what context.

Postscript:   Raja and other males have demonstrated that males in musth in the wild generally have better things to occupy them than ourselves, and are usually exert a great deal of restraint among one another as well as us.  But, each elephant is a unique personality.  Sadly, Raja went missing two years ago following an injury to his trunk.

3 thoughts on “The Elephant’s Chirp”